The voice in the video reminded my of something I had heard before.

I had to do a bit of mind-fishing before the name came to me. It was Adam Kokesh from the speech he made in Washington back around 2008. Very kewl. 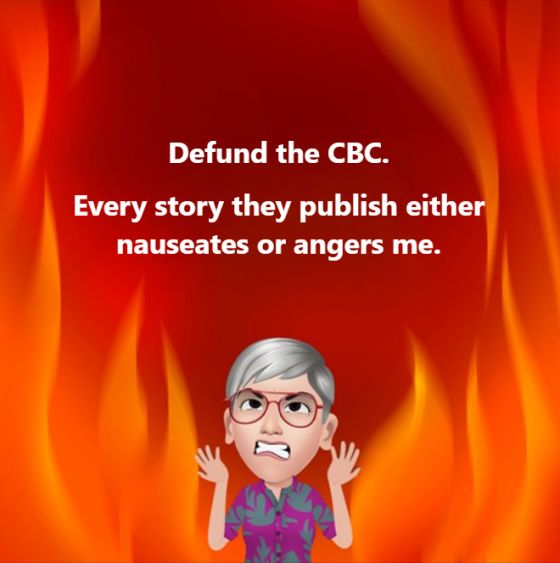 I lived in Kingston from 1983 to 1986. At the time, I could only pick up two FM radio stations. One was a rock station from Ottawa(?) and the other was CBC.

I listened to that CBC station a lot in those days and it was even nauseating then. It seemed like every program featured someone complaining about their problems. Without skipping a beat, the host would always get around to asking them if they had applied for any kind of "government funding" to help them out.

It was at that time I realized that there was ONE UNIVERSAL RELIGION that has more devotees than any of the other competing religions in the world. It has a rock-solid belief system that will take at least a thousand years to get rid of, if then. That religion is statism and their God is the government.

If you pray to the CBC, your prayers may be answered.

Putting a few dollars in their collection plate doesn't hurt, either.

I would always add my own feedback to the comments section - which in those days was either my TV set, my car radio, or anyone who happened to be withing earshot. "I've got problems of my own, you assholes! Where is my government funding?"

Instead, every federal and provincial budget announced that my problems were just going to get worse as more and more of my paycheque was being leached away to help "solve" the problems of the whiners lucky enough to get a CBC interview.

If any of you have watched "Peaky Blinders," there was a great line by the artist who was having an affair with Aunt Polly. There was some question about his political allegiances. His answer was along the lines of, "I hate politics. All politicians do is make some people's lives better by making other people's lives worse."

This reminded me of my visit to the Eastern State Prison in Philadelphia, before the Mass Insanity.

If I remember correctly, the inmates were not allowed to speak for the entire duration of their sentences.

I thought this was a rather harsh punishment, even for convicted criminals. What they are doing to innocent children in the face of this grossly exaggerated "pandemic" is a thousand times worse.

Pay attention to the segment under COVID-19’S IMPACT ON YOUTH MENTAL HEALTH.

I never liked Chomski. People, after hearing some of my views, would ask me if I had ever heard of Noam Chomsky. I was told that he was a "left wing" libertarian. It sounded like an oxymoron to me, unless he was advocating voluntary membership in communes, which I doubted.

He has some brilliant insights but, in the end, like all leftists, he's a vicious, sociopathic animal once he takes off his face diaper.

If when YouTube erases the above video, you can see it here.

SHE CREEPS ME OUT

If when YouTube erases the above video, you can see it here.