They call Trump a racist.

I just came upon some Tweets by another US Democrat named Saira Rao. Here are some of them,

"Whiteness is killing us."

"Until and unless we eradicate toxic whiteness, the violence will never stop."

From a bio about her,

"Saira Rao is an Indian American Democrat who is a former Democratic candidate for Colorado’s 1st Congressional District. She is also a former television news producer and Journalist who worked in a different station." 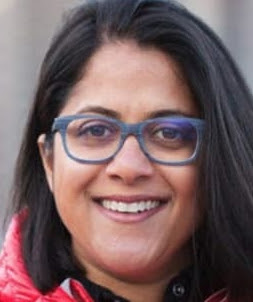 Yep. News producer. Journalist. Democratic candidate. It looks like she also wanted to become a lawyer but flunked out and opted for a profession as a race-entrepreneur.

The article also quotes her as saying,

“I’m certainly not going to stop talking about race and white supremacy and oppression. I want white people to listen to what we’re saying, and not be fragile, and not take it personally, and not get defensive. Change happens when you listen,” Rao said.

Right. She's not going to stop talking about race. Wonderful. Just what we need right now.

"Change happens when you listen," she says.

Are white people listening to her? What kind of "change" is she promoting? Harmony and reconciliation? Or total surrender?

I predict that so long as people like Saira Rao spew their hatred of white people far and wide that, contrary to "not get[ing] defensive," white folks are likely to do just the opposite.

Is this woman serious? Dishonest? Or just plain stupid?

Is this woman a peace-maker? Or the worst type of racist demagogue?

One of her Twitter respondents says, "this is hate speech. Lock it down." That would be a huge mistake. The vast majority of people of all racial backgrounds want nothing more than to live in peace and get on with life. Rather than "lock[ing] down" her vicious demagoguery, it must be exposed to the light of day so that those who wish to live in peace and harmony know EXACTLY what the leftists of all varieties are truly up to.

Is racism a problem in Western society? Yes. Absolutely. But it's not being promoted by a bunch of unidentified "white supremacists."

That much should be obvious to anyone who is sober. 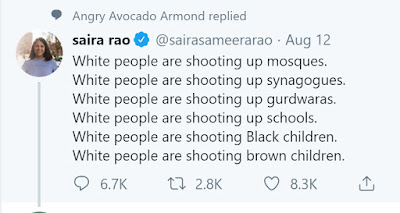 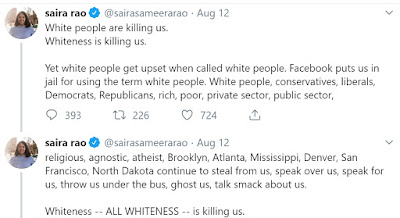 Now, if you have read this far, go back over Ms. Rao's deeply insightful declarations and replace the word "whiteness" with, take your pick - blackness, Islam, Judaism, etc. Then ask yourself, "who are the real racists?"

Taking a different path it is interesting that PCR is pointing to the same trends as I have been seeing for some time now.

Is White Genocide in Our Future?