"Something Fascinating About Science"

Jagmt gets everything about inflation wrong - but ignorant voters reward him.

He should get a real job and work incredibly hard - yet, like so many politicians, instead of doing real productive work, he stokes envy and spews non-stop economic bullshit.

I know Cdns are hardworking people who have each other's backs.

But, this govt, propped up by Jagmt, keeps ripping them blind with its infationary spending and money-printing - it's wrong.

I know exactly how Elisa feels. I went grocery shopping this morning.

Either Jagmt is economically illiterate, or he is a liar.

EITHER WAY, THIS GUY SHOULD NOT BE PERMITTED TO BE WITHIN 100 MILES OF A LEGISLATURE. pic.twitter.com/wO138RDVuA

This essay reminds me of when I worked as a "General Services Analyst" at Dupont's head office in Mississauga. It made me ponder the two and a half years I spent there and what I actually did. It was almost nothing.

Then I quit and went back to driving a cab. And I was actually doing something. Until the cocksuckers at City Hall "fixed" that business. After that, we spent most of our time with our thumbs up our asses.

We're being harvested. There's no other word for it.

"Highly respected Dinesh D'Souza, working together with Catherine Engelbrecht of True the Vote, just released a trailer to their new movie, "2,000 Mules," that shows the world exactly how the 2020 Presidential Election was Rigged and Stolen. The movie exposes the lies of the Democrats, RINOs, and Fake News who say it was the "most secure election in history." It was, perhaps, the least secure in history. The ballot box was stuffed, and stuffed like never before—and it's all on video. Ballots were trafficked and sold in a massive operation in each Swing State. The evidence is so damning, what will the cowards who sat and did nothing about the stolen election say now? The way our votes were taken away is a disgrace to our Nation. It must be fixed."

This morning, I posted some comments to the Historical Hamilton Facebook group. It was instantly removed for containing prohibited keywords. The offending keywords were not included in the removal notice. Since there was no profanity, I was left guessing. Could it be the keyword, "woke?" One or all three of "authoritarian leftist demagogues?" Could it be "Leftist maniacs?" 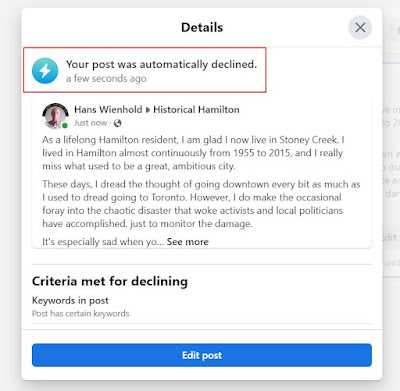 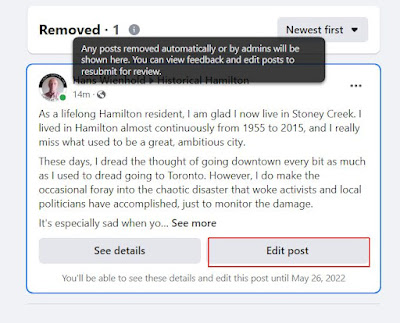 Without any clue as to the offense, I accepted the invitation to edit my post. I decided to compose a completely different post so that it would be more compliant with currently acceptable views.

Here is the text of my original post with the offensive keywords included.

As a lifelong Hamilton resident, I am glad I now live in Stoney Creek. I lived in Hamilton almost continuously from 1955 to 2015, and I really miss what used to be a great, ambitious city.

These days, I dread the thought of going downtown every bit as much as I used to dread going to Toronto. However, I do make the occasional foray into the chaotic disaster that woke activists and local politicians have accomplished, just to monitor the damage. It's especially sad when you think about the number of Hamilton residents who support the authoritarian leftist demagogues who call the shots from City Hall.

The latest blow occurred just yesterday, when council voted to vandalize the last sensible street in the city. Leftist maniacs are hell-bent on bringing Hamilton to a stand-still.

Of course, cancel culture being what it is, it took no time for Historical Hamilton to block me after I posted my comments along with the following video and link,

A Defense of Two-Way Streets

Predictions from about 25 years ago.

Then I went back and posted the link to this blog entry. I guess it got by the keyword feature. Will it survive scrutiny from a human admin?

I notice CBC closed their comments on this report,"Council votes to convert 'serial killer' Main Street to 2-way traffic" very quickly. I guess there were too many commenters pointing out the woke insanity that now forms the basis of most of Hamilton City Council's decisions.