As I browse through today's Coof stats from https://covid-19.ontario.ca/data/case-numbers-and-spread, I notice a few odd things about the way the data is being presented.

For example, take a look at this pie chart. It really screams at you, doesn't it? Obviously, the vast majority of PCR positives are occurring in the unwashed Unvaxxed!

I know it's difficult to read my annotations so here they are again,

Of the people who tested +ve, 382 are listed as Unvaccinated.

What percentage of [the] tests [they ran yesterday] do they represent relative to the percentage[s] of 1 and 2 dose testees?

In other words, out of the 26,213 Ontarians who were tested yesterday, how many had already been vaccinated? (Which raises another question - why would people already vaccinated be getting tested for COVID-19?)

If you scroll down the testing volumes and results page, you will see them broken out by age groups and by public health units but NOT BY VACCINATION status.

The graphs clearly shows no breakdown with respect to vaccination status either. 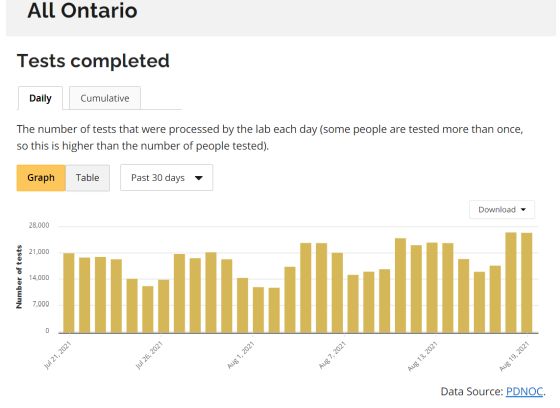 Wouldn't it be interesting if most of the people being tested happen to be Unvaccinated? In that case, the huge dark shaddow would would be much less alarming, wouldn't it? 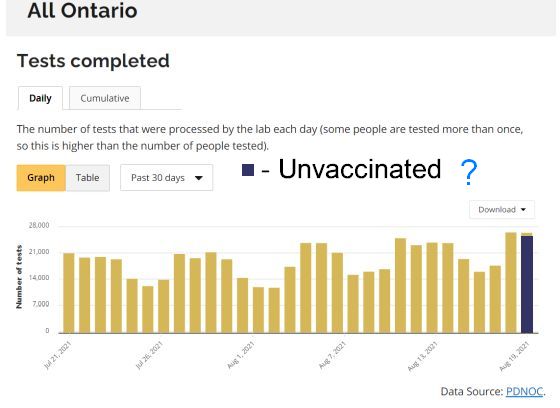 Is the vax status of the people being tested is being recorded along with the test, why is it NOT showing up in the government's COVID tracker?

How many vaccinated Ontario residents are being tested for COVID-19?

"The reassuring bottom line is if you're young, healthy and fully vaccinated, the risk of falling seriously ill from delta remains low, even if cases continue to surge overall, said Morris, with Sinai Health System."

Another reassuring bottome line, as those of us who have been paying attention already know, is if you're young, [and] healthy and fully vaccinated, the risk of falling seriously ill from delta remains low, even if cases continue to surge overall, said I.

When I tried to post this to my home feed, 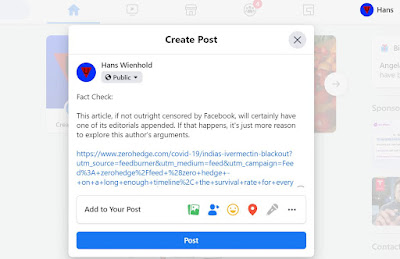 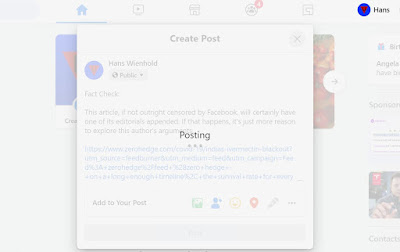 And it just stuck there.

I had better luck posting to the "No More Lockdowns Hamilton" Facebook group, but it was immediately flagged.

I don't respond well to bullying, so I shared it anyway and got this, What is the establishment so afraid of?

I did some additional checking. Here is the epicurve for India from the WHO with my comments. 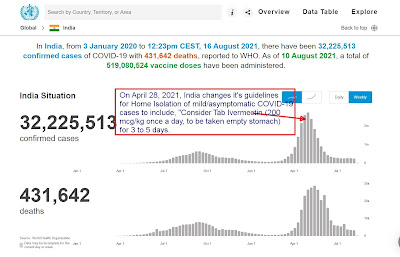 No data available, to suggest a link between India's reduction of COVID-19 cases and the use of ivermectin, ey?

Yeah, especially if you're not even allowed to see it.

For comparison purposes, I downloaded data from the https://covid-19.ontario.ca/data/case-numbers-and-spread

The Ontario data implies that the vaccinations are responsible for the so-called "Fourth Wave" resurgence in Ontario. 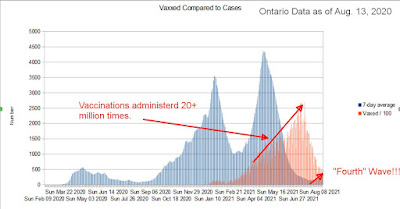 It looks like the URL has been changed on the Ontario government COVID data website so that those using the old one will now be sent directly to the COVID-19 vaccinations data page instead of the Case numbers and spread page. I hate when they do that because it renders any of my old hyperlinks and references obsolete. 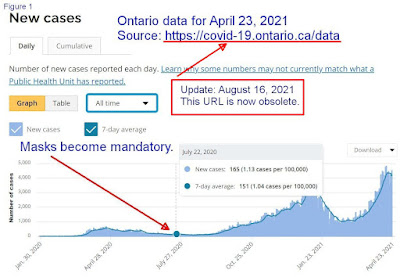 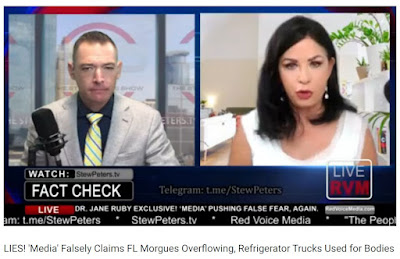 On the coming Climate Lockdowns

Facebook has again decided to join the debate by flagging another one of my posts.

What they slyly do in, let's face it, it's not a "fact check" at all, it's a rebuttal full of typical liberal sleaze, misdirection, and straw man arguments - is to lead the reader away into believing that, indeed, the slimy sleazebags who are calling the shots from the top spots of government, business, and academia have absolutely NO INTENTION of,

"subdu[ing] all of humanity, imposing coercive measures with which to drastically limit individual freedoms and those of entire populations."

Duh! How dumb does the hapless reader have to be to NOT see that this is EXACTLY what we have been going through for the last year and a half and that, as any half-brained trend forecaster can see, has left the ruling elites in an orgasmic state of anticipation with respect to their totalitarian agenda for the future?

Vaccine passports, anyone? (and it won't end there.)

I've been studying these crypto-commie, liberal sleazebags for a lifetime. I know how they think inside out. I can READ THEIR MINDS. The goal of a total open prison form of social organization is EXACTLY where they have been slowly, but steadily, heading for at least the last sixty years.

Fact Check: 'The Great Reset' Is NOT A Secret Plan Masterminded By Global Elites To Limit Freedoms And Push Radical Policies

The Masque of the Red Death Cult

Just as I knew, from experience, after spending many hours in smoky bars, screaming at people around me in order to be heard above the insanely loud music, and smoking two packs of Export "A" would leave me feeling a hell of a lot worse the next morning than if I had not smoked a single cigarette, and instead, just enjoyed the aroma of the ambient tobacco smoke, I knew that the claim that "passive smoking" was just as harmful to your health as lighting one up for yourself was utter bullshit.

You don't really need "studies" to tell you what common sense has already given you the power to know.

I don't know about you but I am sick and fucking tired of hearing mindless Junk News readers telling me what the "studies" show.

Of course, now they have a new BS buzzword. "Models."

You know what? Fuck them.

I know that covering your nose and mouth with a layer of cloth for an extended period of time is probably a really fucking stupid idea.

I picked up a pizza this evening. The girl was wearing one of those surgical masks, you know, the kind that say on the package that they are not designed to protect you from bacteria and viruses. I could tell by the texture that she had been wearing it for a while in that hot and humid environment. She might have even been re-using it.

Do we really need a "study," that few of us can even interpret, to tell us that sticking a microbial attraction net over our mouths and noses, and reducing the natural flow of air into our lungs, is a healthy thing to do?

Human Rights are a Privilege, not a "Right."

Canadians are being fished in.

Those of us among the unwashed, unvaxxed, Trump-loving, white supremacist deplorables have been deluged lately with incessant scolding telling us that WE are the cause of an alleged "fourth wave" of COVID-19 infections.

Not only that. Despite all of the reports we are getting from Junk News outlets like Hamilton's "Proud news leader," that MOST of the new Coof cases are happening in unvaccinated people, reports are trickling in from other processed Junk News outlets, like the Washington Post, that three-quarters of the people infected during an explosive coronavirus outbreak in Massachusetts, fueled by the delta variant, were fully vaccinated.[SOURCE]

At the same time, we have experts, like Dr. Gerald Evans, chair of the Division of Infectious Diseases at Queen’s University, telling us that over 97 per cent of all new cases were among those who did not get a shot.[SOURCE]

If you are starting to feel like your head is spinning from all of the hugely contradictory statements coming out of the Junk News media and the supposed "experts," join the club. Do you think, maybe, you are being lied to, over and over and over?

I am personally starting to feel a case of "information overload." It's giving me a sore throat.

Of all of the people I have spoken to, almost 100% admit that the reason they took the shots was to buy their freedom back from the politicians. Talk about a great scam. A majority of Canadians have swallowed, without even batting an eye, the belief that their freedom is not theirs by right, but rather a list of privileges granted to them by politicians. Climate emergency anyone?

I feel a bit sorry for them now that they are being told that the "new science" may lead to withdrawal of the promised privileges.

I'm just waiting for some "expert" to declare, "Freedom isn't a right. It's a privilege!" Oh wait! 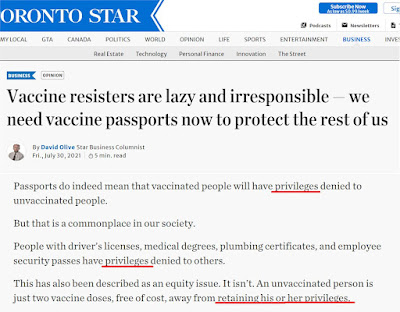 It's been heading in that direction for decades, as anyone who has been paying attention knows.

Earlier on this summer, I decided to break away from the mind-twisting tornado of developments and instead excercise my privilege to go fishing.

The only problem is that this summer the fishing is the shittiest I've ever seen. 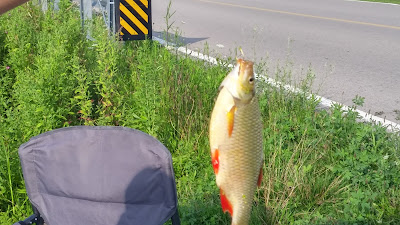 I am not a conspiracy theorist but I am absolutely certain that the Junk News media in Ontario have been given more secret bailout money from Justine Trudeauşescu to install underwater TV sets, which have scared all of the fish into staying home and wearing masks when they go out. And fish don't even vote, at least, not yet. How do you hook a fish that is wearing a mask?

That just gave me an idea. I am going to try using surgical masks for bait.

"The people who are not testing positive in the current outbreak are those who have had COVID-19 previously and recovered. These people account for 9% of Israel’s population but less than 1% of recent infections, according to Kovler’s analysis. This has brought new questions about whether natural infections are more protective against the delta variant than vaccinations — but the answer is not yet certain."

The answer is not yet certain? You wouldn't get that impression listening to the screaming fanatics who are absolutely certain that everyone needs to get vaccinated or else be shipped off to the social Gulag.

See The first country to reach vaccine herd immunity has seen a recent rise in cases among vaccinated people.

The article goes on to argue that vaccinated people getting infected by COVID-19 is evidence that the vaccines are working. (!)

Here's a thigh-slapper out of the U.K.

"It could sound worrying that the majority of people dying in England with the now-dominant Delta (B.1.617.2) variant have been vaccinated."

Yeah. Do ya think?

They go on to bamboozle their readers into thinking this is not such a bad thing!

Arrest People who are Not Vaccinated

and throw them in jail.

I think the survey wouild have been a lot more interesting if the proposal was to execute people who refused to take the vaccine on the grounds that they are murderers.

No deaths, few hospitalizations, but 74% of those testing positive for COVID-19 in Massachusetts outbreak were vaccinated 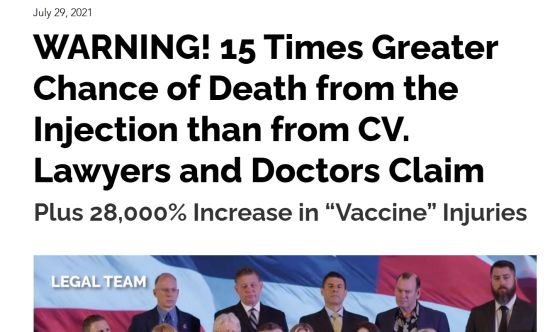