What Makes the Muskrat Guard His Musk?

"During times of universal deceit, telling the truth becomes a revolutionary act."

You would have to be someone like me to understand exactly how momentous this issue is. I have, in my small way, been solidly in the trenches in this inforwar ever since Donald Trump decided to run for president. I won't go into details here, as they have already been fully documented elsewhere in this blog, and on the free speech video channels I occupy, other than to present this screenshot: 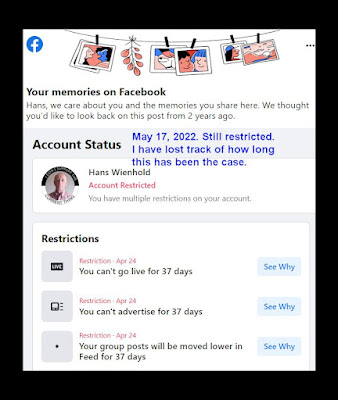 My impression is that, since the vast majority of the population are not engaged in these issues, and especially not from my perspective, they don't even know this has been going on. They have absolutely no comprehension of how they are being manipulated.

And then they go out and vote. You know what that means, right?

I was never very enthusiastic about Elon Musk. I saw him as another crony capitalist making good on political economics rather than market economics. But if his purchase of Twitter really means a return to free speech on that platform, and judging by the hysterical reaction of the authoritarian collectivists currently dominant across all government, Junk News, social media, "entertainment," and academic platforms, that's EXACTLY what it means, then Musk is one of my heroes.

That didn't take long at all.

Since the above YouTube video is no longer be available by the time you read this, I have taken the liberty of posting his opening monologue, and interview, here.

May all of you muskrats out there guard your musk!

For more insight and comprehension of exactly where we are heading, consider watching the following video documentary series.The difference between the consquences I have embedded the first episode below, and what we are experiencing today, is mereley a matter of degree, not principle. "No man, no problem."

The solution to ever higher dairy prices is obvious.

Instead of selling dairy products, they could hire an army of gig workers to buy, or lease, cows and "share" dairy products using "disruptive technologies." The mistake the Greek Orthodox nuns made was that they didn't have an app. Nor did they have the entire Junk News apparatus singing praises to their totally innovative new industry.

Taxi industry "quota owners" never received a cent in compensation. The politicians just threw them under the bus. They were the "unvaxxed" of 2012.

As far as I know, no one in the Hamilton taxi business committed suicide over what the politicians did to them. Considering the magnitude of the crime, and the degree of devastation it caused, I find that surprising.

I have a theory, though. Since the taxi business is heavily populated with immigrants from corrupt and war-torn Third World countries, having everything they worked for destroyed in the blink of an eye was not unfamiliar to them.

And they learned a valuable lesson: that Canada is, in many ways, just as corrupt as the countries they fled from.

One of my friends in the business immigrated from India back around 1990. When we first became acquainted, he would tell me stories of the ubiquitous corruption in his native country. "If you want a telephone installed, you will wait five years. But if you know the right palms to grease, you can get one in twenty-four hours." After several years of building up his taxi business in Hamilton, he told me he had had a realization. "You know, Hans, it is just as corrupt here as it was in India." I finished his thought for him—"it is just less visible here." Perhaps that is one reason he never invested as heavily in "taxi quotas" as some others did, and was thus able to weather the storm better than most.

As I read through the following report on the plight of dairy farmers, I could see numerous parallels between their regulated industry, and the one I left in 2018.