At first, I embedded this video at the bottom of this rant. Then I decided, it's so good that it belongs at the top. Brand used to irritate me, but lately, he has been bang on.

I noticed that the Russell Brand clip was, inexplicably, spliced out of the Tucker stream, so I googled it and found his rant from three weeks ago. This might be the one.

Maybe it was because I was in the cab business that I could see what was coming so easily. It started around 25 years ago when the credit card companies prevented me from buying good-tasting American cigarettes from Switzerland. I had read about how the U.S. government was strong-arming credit card companies to stop processing internet tobacco sales. When it happened to me, I knew why.

It started with tobacco, but how much of a fool do you have to be to have thought it would end there? Now it's plastic bags, meat, and road space. Oh! And I almost forgot about the lockdowns, masks, and vaccinations.

All were incremental steps toward transferring, even the most basic human choices, to government officials.

They even prescribed the number of guests you could have over for Christmas. Do you remember that? Or has it gone down the same memory hole that has been replaced by, "No one ever said that the vaccines would stop infections and prevent transmission!" Like pre-2020 vaccines did.

Then there was the push toward computerizing taxicab dispatch, along with GPS tracking. Followed by the mandatory cameras. I felt each turn of the screw.

It's like assembling a jig-saw puzzle. A very easy one. The final picture is crystal clear.  Add a dash of authoritarian collectivism, our dominant political fashion, and you don't even have to do any work. The pieces all fall nicely into place.

Then there was the problem I had getting a sticker when I bought an ex taxi Crown Vic, because my insurance policy was not showing up on the IBC COMPUTER! Even though I had bona fide coverage AND a fucking pink slip.

The IBC link is gone? I wonder what that is about? Try this one.

I argued with the girl behind the counter and even got angry with her, until she pointed out that she had no control of the situation. Until the policy showed up in the database, the printer would NOT spit out the permit.

At which point, I envisioned myself arguing with the order taker at a McDonald's restaurant, trying to explain to me that there was no way she could process my order for a quarter pounder with cheese combo, because I had already exceeded my monthly beef quota. "It's to save the planet," she would cheerfully remind me.

I'm hearing that a lot lately when I ask for a bag in the grocery checkout line.

Finally, there was the freezing of the GoFundMe account for the trucker convoy. I had not made a donation, but when the devious fuckers froze the trucker's account, I searched for another platform and found GiveSendGo. I sent them $10 U.S.

That too was frozen, and as of today, it still hasn't been refunded.

And, yes, that sleazy c*nt of a liberal leftist "thought influencer," Dean Blundell, published the hacked list of all the GiveSendGo donors on his website. 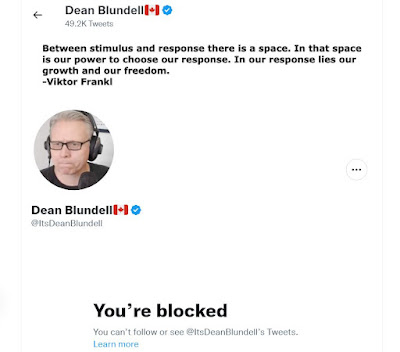 His sleazy act, which he deleted a short while later, did not displease me. It was a gift. It was a public demonstration of just how low these leftists will go to crush those who oppose them. And since the Dean Blundells of the world are now deeply entrenched in all of the power centers, do you still think Biden won the 2020 election?

Keep in mind the fact that most voters don't know what the fuck they are doing, and that the political machinery know this, and uses it, to frame its message.

So, yes, Central Bank Digital Currencies represent a grave threat to that remnant of the population who still value their privacy, and their freedom.

The media & excess deaths: Disgracefully complicit by their silence. pic.twitter.com/zMq5EjgWg5

One thing I am also finding strange, is how Statistics Canada seems to be dragging their feet now in presenting the charts for all-cause mortality in Canada. Their charts have not been updated since July, 2022. I don't recall them being so slow in the past. I have been particiularly interested in the mortality stats, since the COVID response, for people in the 0 to 44 year age bracket. 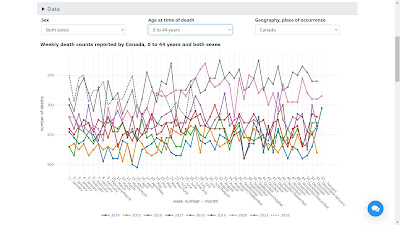