Confessions of a Young Offender: The Great West Mountain Flood of 1967

While pondering a post on Facebook about the mountains of medical waste resulting from mask mandates and mask hysteria, I started to wonder if some of those billions of useless masks might be responsible, in part, for Hamilton's recent sewer woes. 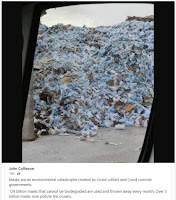 And that reminded me of something I was involved in back in 1967. 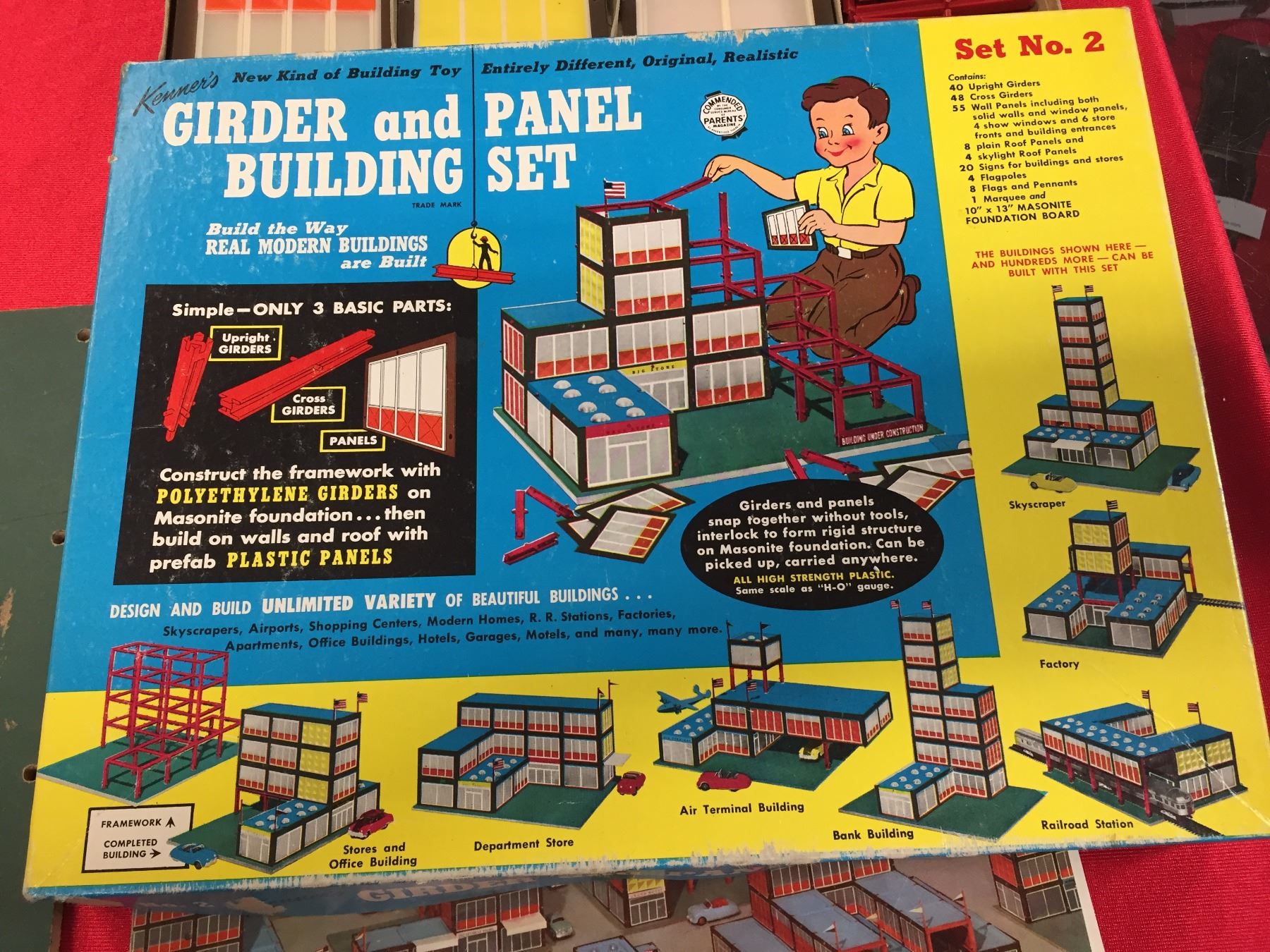 During the summer of 1966, I started to lose interest in the things I enjoyed doing at the time, like building skyscrapers and other structures with my girder and panel sets and Stalox mini-brick sets, reading about the universe, swimming up at the Westmount pool, and being a general shit-disturber in school.

I wanted something better. Something more exciting.

Then I learned that a group of my old buddies had taken up smoking. That sounded pretty kewl to me at the time, so I ventured up to the spot where they were known to hang out and started bumming cigarettes from them to prove that I, too, could be super-kewl.

They hung out at the southeast corner of the intersection of the "Black Road" and the creek. We called it "The black Road" because it was a black road. It was composed of crushed black gravel and it ran south from Mohawk Road to Limeridge Road. The creek was simply known as, "The Creek." (later - Raider's Creek)

As I gradually became accepted as a member of the gang, I discovered they were involved in all sorts of exciting things to do, like playing football and baseball, building tree forts, hiking, and cycling, and other clean-cut activities like knocking on people's doors after dark and then hiding behind a bush (we even tried the old flaming bag of feces trick on one household,) or throwing snowballs at passing cars in the winter from behind the snow fence on the south side of Mohawk Road. When the snow was all gone we used wads of wet toilet paper.

We would even place phoney orders for taxis, pizza, and Chinese food and send them to the homes of people we didn't like, which turned out to be so much fun we started playing the same gag on people we liked, as well.

Years later I ended up driving a taxi and I can tell you that showing up at an address, only to discover that the pizza guy, the Chinese food guy, and the coroner's van were already there didn't seem so funny anymore. Talk about Karma!

In the taxi business, when you end up NOT getting a paying customer from the address, we call it a "dead trip."

Aside: I read once that NYC taxi regulations mandated that all taxis have grills on their trunks to make the contents visible. No explanation was given, but one intriguing opinion I heard was that, in those days, people could not afford expensive funerals, so they would just call a taxi and throw the deceased into the trunk. This would probably have been illegal, hence the grill, and possibly even the origin of the term, "dead trip."

We decided to make up a name for our gang. We called ourselves "The Creek's Raiders."

It was our first step into organized crime. (Going into the cab business was my second.)

One night, as I was leaving the house my mother asked me where I was going. I told her Pig Boy and I were going to call on Bloat. She asked me why all of my friends had such unpleasant names. She said she didn't like those names and that I should find some new friends. I didn't.

I had nicknames as well, but too many to list here.

We weren't always into mischief though.

Sometimes we were just boys being boys. In those days, it meant something totally different from what it means today. Today it means uhm, ah, hmmm... fucked if I know!

"Well, I built me a raft and she's ready for floatin' Ol' Mississippi, she's callin' my name." 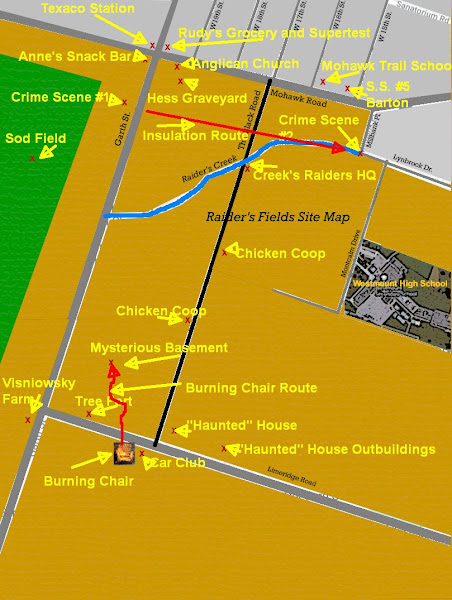 Every spring when the snow finally melted, the water level in that creek would rise. Some years the water got deep enough that we could build and float rafts in it. 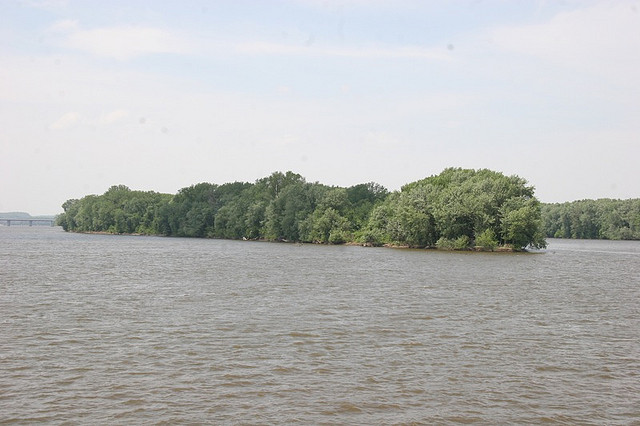 It was a lot of fun pretending to be Tom Sawyer floatin' out to Jackson's Island to have a few smokes with Huck.

1967 must not have been a very good year for snowfall. The creek's flow was barely a trickle. The climate, she was a changin'.

One of the Creek's Raiders ring leaders came up with a plan to raise the water level in that creek by building a dam at the mouth of the storm sewer at the intersection of Lynbrook Dr. and Millbank Pl.

At this point, let me be straight. This was NOT my idea. I was never one of the Creek's Raiders ringleaders. I vas zyust vollowing örders. I would have rather spent my time volunteering at the Idylwilde nursing home on San Road or doing my grammar homework, but I was afraid that, if I did not go along with the gang on this enterprise, they would have surely beaten me up.

We visited our supply depot at the housing development on the west side of Garth and grabbed a few sheets of plywood figuring the plywood and a few rocks would do the trick. The plywood approach didn't work. We could not establish an effective seal. The creek water just trickled around and through the cracks. What we needed was something that would really plug up that grate.

Some have conjectured that Tank was the ringleader because of his physical size and incredible strength. When he "pulled a hairy," the group would scatter. He once caught Leonardo Wolenski up the side of the head with one of his flailing arms and almost knocked his head clean off.

Nope. Tank was the brains of the outfit. He came up with the ideas and took care of the logistics. He was our combination IT/Myer Lansky guy. But he lacked ambition. While he might have conceived the plan, it was gang leader, BeBe Remortis (pronounced Bee-bee,) who ultimately called the shots.

I was there when the original plan was hatched.

Bebe: You know, the creek just isn't running fast enough. The plywood dam isn't working. We need something that will really seal up those cracks.

Tank: I think I know of a way we can fix that. I've seen a bunch of insulation over at "the houses." What if we borrowed some and used it to really seal off the water flow at our dam? Those nice workermen have the insulation tightly packed into bales that will be easy to transport. Of course, we will return it after the thaw dries up.

Remortis gave it the nod and before long we had installed one bale of insulation at the storm sewer opening. 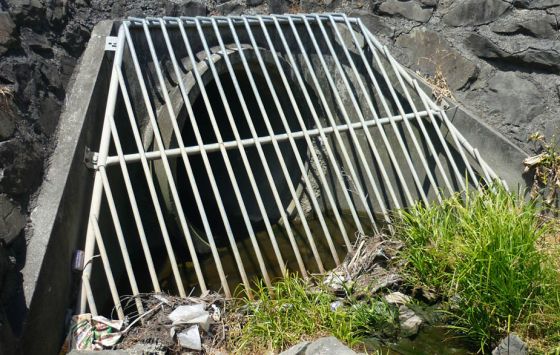 [Not the original grate]

It didn't work. There wasn't enough insulation to create an effective seal.

So we went back and borrowed about ten more bales.

We plugged every crack and crevice we could find around that sewer opening.

Still, nothing happened. We covered the entire opening with as much insulation as we could find, which was lots thanks to the workermen, and really packed it tight.

And still, nothing happened!

The water level did not appear to change at all. It was disappointing.

So much for that plan. It was getting late and we had spent the whole day on this engineering project. And for nothing. After all of that hard work, we had absolutely nothing to show for our efforts. Still, you can't fault us for our inherited Anglo-European work ethic. "Idle hands are the devil's workshop."

Tired, hungry, and disappointed, we accepted our failure, abandoned the job site, and went home for supper. After supper, we gathered at St. Vincent de Paul for a good game of punch-out. Some guy in a Mustang chased us right over the grass at Buchanan Park during one round.

The next day was a school day.

I don't recall noticing anything on the way to school the next day, but on the way home for lunch - we used to get an hour and forty-five minutes for lunch in those days - when we got to the intersection of Millbank and Lynbrook, we could not believe our eyes. Millbank Place was gone. In it's place there was a river flowing north to Mohawk road. It wasn't very deep. The sidewalk was still navigable. But the water on Mohawk Road was much deeper; perhaps as much a twelve inches deep. Seeing a city bus plow through it was quite a sight. It was the Venice of South Hamilton. It would have been perfect for rafting, but we had moved on to other projects by then.

The cause of this mayhem was truly a mystery... to many people.

City work crews managed to clean up the mess rather quickly. I don't think they had been unionized yet. Whether any of the insulation was ever returned to the job site for its original purpose remains unknown.

I was walking home from school that day with a friend named, "Karvey." He had acquired that nickname as a result of his excellent woodworking skills. We were going over the scientific concepts we would need to successfully write Mr. Ashbaugh's test the next day. It's difficult for me to remember the exact subject matter at the time. I think it was basic concepts covering freezing, evaporation, sublimation, and precipitation; all pretty basic stuff, unlike the sophisticated Al Gore movies kids would be forced to watch thirty years later. "Believe in the science!"

For the record, the Karve had absolutely nothing to do with the planning and construction of the hydro project recorded in this essay.

As we approached Lynbrook and Millbank, we noticed a city works truck was parked nearby. Some guy was walking down Millbank using a stethoscope to listen to the road. I was expecting a bunch of guys in white coats to show up and shuffle him back down to the facility at West 5th and Fennel.

It turned out he was a city worker. When he saw us he ran over and demanded to know our names. Did he know something?

There were just two sacred rules that applied to all Creek's Raiders members. The first rule was, "deny everything." The second rule was, "Always use a fake name."

I told the guy my name was "Gant Fane," from the novel "Iron Scouts of the Confederacy."

Karvey, being innocent, of course, provided his real name.

As far as I know, there never was an investigation.

It was only recently that I paused to wonder if our little engineering project caused any damp basements in the vicinity of Millbank Place. At the age of about twelve, we lacked the foresight to see how much damage our perfectly laid plans could end up causing.

In the end though, what are a few bales of fibreglass insulation when compared to the hundreds of thousands of tons of medical waste that have been produced in order to pretend to fight COVID-19?

When I look at the actions of our so-called "leaders," I realize that most of them have no more foresight than a group of twelve-year-old boys. 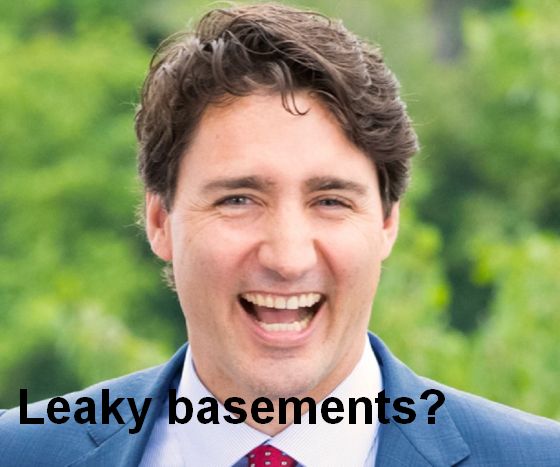 The joke is on Canadian Voters.

Translation: 'As long as there's a 0,03% that we're going to shit ourselves, we'll keep wearing them.' pic.twitter.com/YZbQMDZLPz