Green "apartment" for rent for $550 in Hamilton

Check out this July 30, 2022 Spectator report, ‘Prison cell’-sized apartment for rent for $550 in Hamilton

The ever-vigilant observer of contemporary madness, KK, sent me the link to that report along with the comment, "At least it has a window," which got me thinking about what turned into this short essay.

A window! Well, that is clearly an insult to anyone who can't afford to have a window. In fact, if I were in charge, I would immediately act to ban windows in all dwellings in the name of Diversity, Equity, and Inclusion. Or better yet, why not start taxing windows? If someone is rich enough to afford a window, then they should be taxed.

Seriously though, taxing windows is not a new idea. I read a book years ago called For Good and Evil: The Impact of Taxes on the Course of Civilization by Charles Adams.

There was one story about how they used to tax houses by the number of windows they had. Some absurdities, like houses without windows, resulted. See here also.

One of the more interesting stories explained why newspapers have such big pages. At one time they were taxed by the number of pages. In part, this contributed to the incentive make the pages bigger.

I always found reading newspapers a real hassle, especially on a bus or in a crowded waiting room, or in any other place where you couldn't lay it out on the table. And forget about reading one on a park bench on a windy day, though on less windy days they could come in handy as a covering for those sleeping on park benches because they could not afford to rent one of those luxurious $550 Greta Thunberg suites. My old man used to read the paper while lying on the living room carpet. Childhood memories, ey?

About six years ago I got a call from the Hamilton Spectator. The woman wanted to sell me a subscription. I was going to tell her "I don't read the Spectator," but she interrupted me on the third word with, "Oh! You don't read?"

I thought that was a clever and well-timed bit of psychological manipulation, but rather than becoming defensive, I simply agreed with her. "That's right. I don't read." Then, thinking of Chauncey Gardiner, I added, "I just watch TV."

That was pretty much the end of the conversation. She used a smart tactic, but also one of the few times I was able to think on my feet quickly enough to detonate her hook. If she had pressed, I would have asked how much The Spectator would pay me to consume their Junk News product.

Ridiculous newspaper page sizes are thus just another example of things that don't make sense until you trace the origins back to some government initiative.

Whenever I see something really retarded going on, like Hamilton's pro-idling, fuel-wasting, tax-guzzling, anti-car street policies, disgustingly crowded hospitals, twenty taxis queued for trips and blocking traffic on King St, or soon-to-be fashionable bathroom apartments, my default explanation is that it has a political cause unless there is some acute natural cause such as a volcanic eruption, earthquake, tornado, or deadly pandemic. Granted, most destructive laws and mandates don't originate solely in the legislatures. They originate from the confluence of labor-shirking politicians and their enablers in the broader government sector, I.E. - subsidized media, entertainment, and academia.

And, by "deadly pandemic," I mean a real pandemic, like the Spanish Flu, or the Black Plague, not the stupidity pandemic we have been living through for two plus years now. An alien visitor arriving in March of 2020, upon witnessing the ridiculous behavior of consumers, would have immediately, and wrongly, concluded we were in the middle of a severe dysentery pandemic.

After a few more years of building back better in response to the COVID-19 panic, and the increasingly absurd climate hoax, be prepared for bathroom-sized apartments to become the norm.

You will own nothing and you will be happy.

Speaking of being happy with sustainable living, while attending Mohawk College back in 1983, I was renting a bachelor apartment at the Mountainview - 325 James St. S., for $189 per month. It had a large walk-in closet. One day my lab partner was complaining about the room he was renting on West 2nd. St. near Brucedale. The landlady was a real Nazi. She forced him to do chores in addition to his rent.

One day at the lunch table he complained of having forgotten to take the garbage out. After the truck had already passed the house, the landlady ordered him to chase after the truck with two bags of garbage. One of the bags broke, splattering its contents on the street. After telling us his tale of woe, one of our classmates quipped, "Sure! Jump right in!"

Seeing an opportunity to act like a true liberal, doing well while doing good, I offered to rent him my closet for $100 per month, which he happily accepted. He took some ribbing from our classmates over this arrangement.

A while later, while gathered at the lunch table in the cafeteria, the same guy who made the Glad Garbage Bag commercial quip noticed a discarded coat hanger on the floor. He picked it up and waved it at my lab partner.

"Does this remind you of anything?"

Did you happen to catch that manipulative trick CHCH news pulled the other night? In their report, "Canadian ancestors of slaves vow to fight any new growth of racism or white supremacy in the country." Here is the segment containing their sleazy trick:

This type of Junk News manipulation of the bovine mass mind is specifically designed for the typical somnambulistic CHCH viewer. You know who I mean. The kind of person who, six months or so ago would have told you that getting an mRNA shot doesn't just protect you, but protects the people around you, and summarily dismissing your claim that the vaccinated were carrying as high or higher a viral load than the unvaccinated as "just not true." And who, if reminded of their confident Junk Belief today, would swear up and down that they never made such preposterous claim. "The vaccines were never meant to prevent transmission!"

The world has become such a clown show that I would hardly be surprised if the next commonly held Junk Belief will be, "The vaccines were never meant to prevent severe illness or death!"

It's subliminal. And it works. It's why we have clowns like Justin Trudeau and Jagmeet Singh ruining the country.

Following up the next day, CHCH reported, "Dozens of people were at Lakeside Park in Port Dalhousie to celebrate Emancipation Day."

Yes. "Dozens," though, from the video it appears that some of those dozens simply showed up to enjoy the beach. 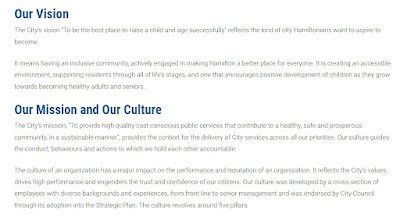 To celebrate Emancipation Day, I took a short walk around Hamilton's amazing core. Local politicians have been "fixing" Hamilton's core for as long as I can remember. Just like they "fixed" the cab business. Given such staggering success, how can you doubt that politicians have rheostatic control of Earth's climate? 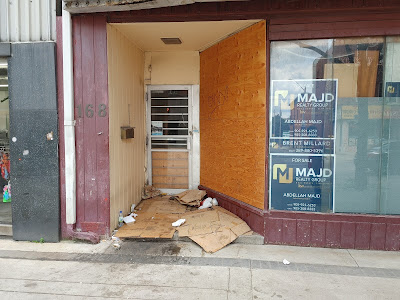 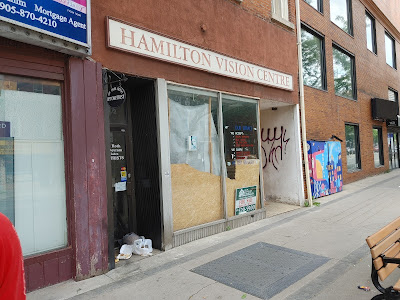 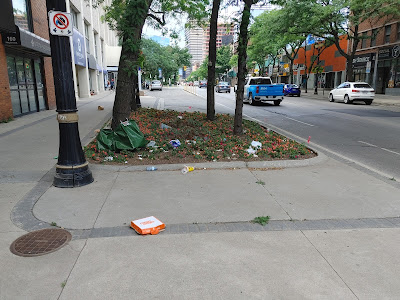 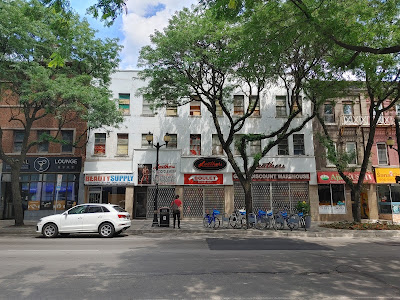 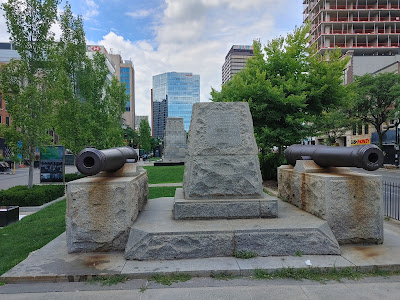 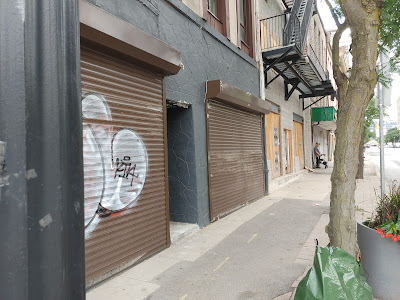 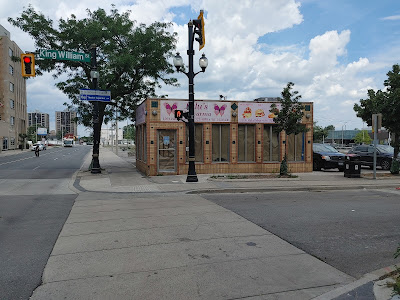 A sustainable homeless camp on Rebecca St, between John and Catharine. When I stopped to snap this photo, it could smell the camp from the street. It was not a pleasant smell. It was a pungent mixture of sewage and decomp. I don't blame these people for their plight. They are only living within their means in a country where bubble economics and mass immigration have made affordable housing inaccessible to anyone who can't afford to rent a bathroom.<sic> 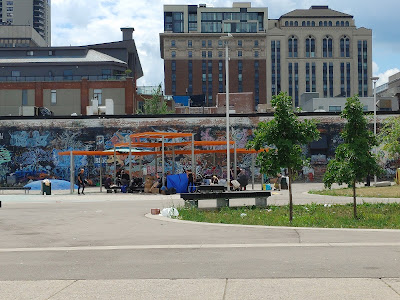 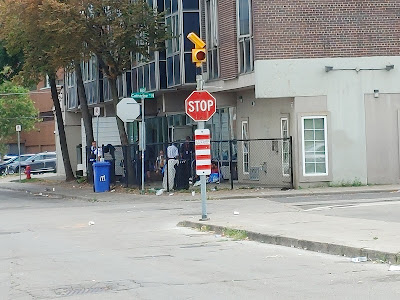 Finally, a reminder of what Hamilton's core used to be like before woke politicians engaged in "fixing it."

Given enough time, this vestige of Hamilton's past will also be "fixed," no doubt in pursuit of Diversity, Equity, and Inclusion, or to save the planet. 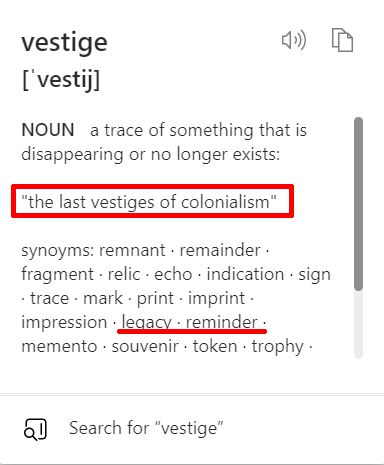