I Saw it Coming 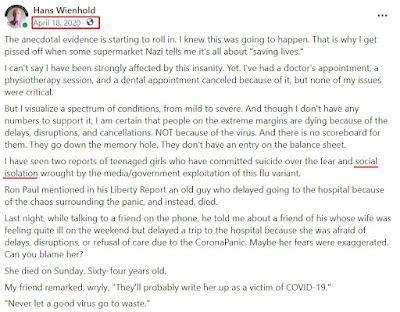 The anecdotal evidence is starting to roll in. I knew this was going to happen. That is why I get pissed off when some supermarket Nazi tells me it's all about "saving lives."

I can't say I have been strongly affected by this insanity. Yet. I've had a doctor's appointment, a physiotherapy session, and a dental appointment canceled because of it, but none of my issues were critical.

But I visualize a spectrum of conditions, from mild to severe. And though I don't have any numbers to support it, I am certain that people on the extreme margins are dying because of the delays, disruptions, and cancellations. NOT because of the virus. And there is no scoreboard for them. They go down the memory hole. They don't have an entry on the balance sheet.

I have seen two reports of teenaged girls who have committed suicide over the fear and social isolation wrought by the media/government exploitation of this flu variant. Ron Paul mentioned in his Liberty Report an old guy who delayed going to the hospital because of the chaos surrounding the panic, and instead, died.

Last night, while talking to a friend on the phone, he told me about a friend of his whose wife was feeling quite ill on the weekend but delayed a trip to the hospital because she was afraid of delays, disruptions, or refusal of care due to the CoronaPanic. Maybe her fears were exaggerated. Can you blame her?

My friend remarked, wryly, "They'll probably write her up as a victim of COVID-19."