The Typical Politician - From Mein Kampf

I've heard a great deal over the years, from apparently knowledgeable people, about what Adolf Hitler supposedly stood for. It was mostly bad, of course, but occasionally, someone would tell me that Hitler was actually right about some things. That usually surprised me. "Some things like what?" I would ask.

I finally decided to go to the source to see for myself what this man actually said.

And boy, I found myself laughing out loud as I read some of it. Hitler actually was right about some things.

Consider the following paragraph and, while reading it, think of today's typical politician.

Do these three paragraphs describe the kinds of people who get elected into positions of power all over the West today? I think they do.

"TODAY it is my conviction that in general, aside from cases of unusual talent, a man should not engage in public political activity before his thirtieth year. He should not do so, because up to this time, as a rule, he is engaged in molding a general platform, on the basis of which he proceeds to examine the various political problems and finally establishes his own position on them. Only after he has acquired such a basic philosophy, and the resultant firmness of outlook on the special problems of the day, is he, inwardly at least, mature enough to be justified in partaking in the political leadership of the general public.

Otherwise he runs the risk of either having to change his former position on essential questions, or, contrary to his better knowledge and understanding, of clinging to a view which reason and conviction have long since discarded. In the former case this is most embarrassing to him personally, since, what with his own vacillations, he cannot justifiably expect the faith of his adherents to follow him with the same unswerving firmness as before; for those led by him, on the other hand, such a reversal on the part of the leader means perplexity and not rarely a certain feeling of shame toward those whom they hitherto opposed. In the second case, there occurs a thing which, particularly today, often confronts us: in the same measure as the leader ceases to believe in what he says, his arguments become shallow and flat, but he tries to make up for it by vileness in his choice of means. While he himself has given up all idea of fighting seriously for his political revelations (a man does not die for something which he himself does not believe in), his demands on his supporters become correspondingly greater and more shameless until he ends up by sacrificing the last shred of leadership and turning into a 'politician; in other words, the kind of man whose only real conviction is lack of conviction, combined with offensive impertinence and an art of lying, often developed to the point of complete shamelessness.

If to the misfortune of decent people such a character gets into a parliament, we may as well realize at once that the essence of his politics will from now on consist in nothing but an heroic struggle for the permanent possession of his feeding-bottle for himself and his family. The more his wife and children depend on it, the more tenaciously he will fight for his mandate. This alone will make every other man with political instincts his personal enemy; in every new movement he will scent the possible beginning of his end, and in every man of any greatness the danger which menaces him through that man." 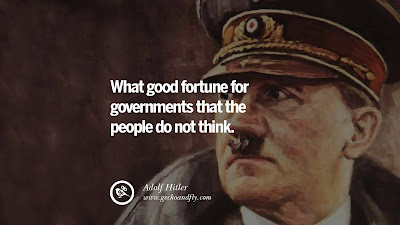 This is the interview that made me think of Hitler's assessment of the typical politician.

From social distancing tickets to back to school plans, @HamiltonsMayor @FredEisenberger weighs in on the pandemic response. @nicolemartin has the interview. #HamOnt