I hope the boyfriend was driving an electric car at least.

"Squire also had to convince Chelsea's boyfriend to take a day off work to drive them all the two and a half hours to Stockholm."

And of course, two and a half hours back. What, no rickshaws available?

"Squire wasn't sure Thunberg would be there. It was the holiday break. Maybe she was somewhere else, or took a day off to be with family. But Squire had to take a chance to meet her climate change hero. The three made the drive to Stockholm."

So the five hour drive was predicated on the mere chance of a meeting.

"Squire, who won the Prime Minister's Award for Teaching Excellence in 2019, did the most Canadian thing. She apologized for taking a jet across the Atlantic instead of a sailboat, which Thunberg recently used to get to New York for her address to the United Nations."

Yep, the words Uber made famous, "It's better to ask for forgiveness than permission."

"But I only had a week and I really wanted to see my daughter."

Well, since you're such a committed virtue-signaler, we'll make an exception for your hypocrisy.

(I'm going to post the above to their comments section. Any bets as to how long it will survive? Not polite enough? I'm in no mood to be polite over this interminable bullshit.)

Okay. I removed the word "puke."

You can visit the CBC communist propaganda page by clicking here.

Of course, you won't be able to read my comment there.

It took less than two minutes for them to hide it. 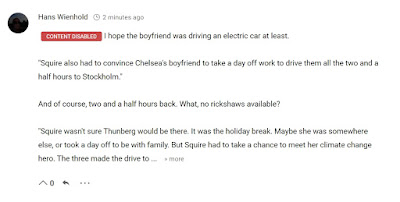