As posted in the comments section of We asked: What are your 3 wishes for Hamilton in 2020? and removed by their commissars within the next 20 hours.

There will be no more austerity budgets and there will be loads of money to invest in people, in housing, in sustainable infrastructure and transit. No more time will run out and no one will ever die again. Our elected officials will recognize that and act.

Large groups of people will organize and say "enough is enough." Then smaller groups of people, like Hamilton ACORN, the Disability Justice Network of Ontario, Environment Hamilton, and the Hamilton Centre for Civic Inclusion will call all the shots. Dissenters will be incarcerated or executed, or put to work building bike lanes and speed bumps.

No child or adult should have to wonder if they will be safe or if they will wake up from the frigid weather because they have no shelter or wonder if and when their next meal will be. Therefore, the government should tax all private income 100% at source and provide each member of society with their right to food and shelter. All fossil fuels should be banned to save the planet and deliver these rights.

Bring back life skills to elementary schools like how to fashion tools out of stone and how to hunt for fish and game.

All members of our community and vulnerable persons will feel included and heard.

Bullying will become a thing of the past, unless you try to avoid paying taxes or misgender someone. Or smoke a cigarette indoors.

Let's put a real value on the tremendous natural assets we have in Hamilton. The entire city of Hamilton should be turned into a Greenway to allow local city residents to walk and cycle their way to local nature trails to experience the mental and spiritual rejuvenation that millennia of our ancestors naturally have imbedded into our DNA.

Let's go back to the way things were before Europeans invaded and stole the land. Then everyone will have housing and stable communities.  No one lived on the streets in 1491.

Every tenant in Hamilton has the right to a safe and healthy home. Therefore, anyone who has the means should be drafted into labour gangs and put to work providing these basic human rights.

Once we have achieved all of these goals more people talk to their neighbours and get involved in their building, neighbourhood and city.

My wish is that all of the people of white, European ancestry, who have stolen this land from the aboriginal people (with the exception of those of Portuguese and Spanish extraction) be deported to Central and South America to deal with the problems they have caused down there. It's only fair.

There can be no better way to achieve an LRT, clean water, climate stasis, free housing, free dope, civic inclusion, social justice, and female Santas. There will be no crime so we won't have to worry about rehabilitation.

I don't know if we'll still have indoor bathrooms though.

This wish was inspired by We asked: What are your 3 wishes for Hamilton in 2020? 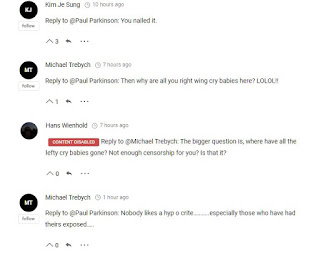 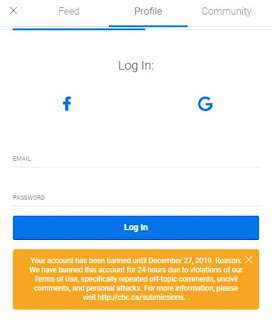 The purge continues. Now I've been sentenced to the CBC gulag.

I'm wondering if it was just one violation, or all three?

I think I'll go with uncivil sarcasm. How could they tell though? After all, my long comment was just a non sugar-coated version of the Communist Broadcasting Collective's own party line.

That's the thing about the left though, they don't like it at all when you spell out their agenda in words that even their opiated masses of "useful idiot" followers can understand.

Think about it. The CBC is the de facto propaganda organ of Canada's governing elitesp . Their Stalinesque "No man? No problem." approach to monitoring (and governing) opinion and information is a foretaste of how they would like to govern all of society, as an open prison camp. (as Alex Jones or someone similar pointed out prior to being de-personed themselves.)

I'd consider voluntarily moving to Central or South America, though I somehow doubt the progeny of the Conquistadors would welcome me with open arms either, even as they, themselves, are being encouraged en masse to become Democrat voters in the U.S.

Where else could someone like me go? The range of options seems to be getting smaller all the time. I certainly could NOT go back to where I came from since the U.K. and Germany have already become more extreme versions of CBC ideology in concrete political form - not just censorship but real fines and jail time. (Though there are no firing squads and labour camps, at least not yet.)

Where else is there? Russia? Who'd've thunk I'd even be considering THAT just a few years ago?

Hopefully my enthusiastic support for Putin's water-carrier in the White House will make it easier to get my Russian green card.

No Man. No Problem. 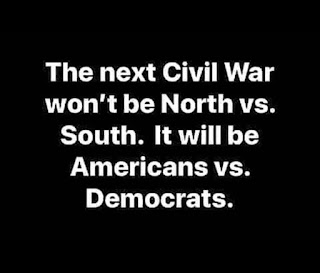 "And then once you realize how it's being powered, that it's using bodily system and bodily waste, then there's also this repulsion factor — and the insect once you see that insects crawling around."