Gerald (See below) is bang on when he criticizes Ray Dalio's ridiculous claim that "capitalism has failed." It just goes to show that you don't have to be smart to be rich.

For much the same reasons as Gerald gives, I have felt my blood pressure rising whenever someone chooses to wisely inform me that "capitalism has failed." If I were in a good mood, I would simply tell them that WE DON'T HAVE CAPITALISM. To hear this mantra repeated over and over and over again, for a span of five decades ends up really trying a guy's patience to the point that, when not trying to "be the best a man can be," I would simply reply with, "You are a fucking retard."

I know this will be considered to be nothing more than "tin-foil hat" libertarianism, but one of the first things I learned is that government economic intervention causes distortions including, but not limited to, shortages and surplusses.

Unemployment, for example. It is both a shortage (of jobs) and a surplus (of labor,) in EXACTLY the same way as taxi meter rate mandates create a shortage of customers and long, long lines of vacant cabs. Both are created by government interference into the free market.

I also read Hans (!) F. Sennholtz's fantastic book, "The Politics of Unemployment" back when it first came out which contained, for me, the best summary of the causes of unemployment I have ever read. From the description on Amazon,

"The modern age of economic intervention began under the pretense of helping workers. Professor Sennholz demolishes the entire edifice that gave rise to this movement.

We were told that workers must be organized into unions. They must have job protection. Their safety must be guaranteed by legislation. There must be a minimum wage. People under the age of 15 must never engage remunerative work, for that would be exploitation. And workers need retirement income. If unemployment rises, nothing short of full-scale central planning is required!

So on it goes, except for one inconvenient fact: the age of intervention accomplished precisely the opposite of its stated goals for workers. The unemployment of the 20th century was government created. And today, workers are taxed, regulated, and regimented to their own detriment.

Here is the uncompromising case against the entire interventionist regime erected on behalf of workers. No one does a better job in showing how the state has harmed the very group that it claimed to be backing.

The title suggests merely politics, but this book is filled with economic theory. It's one of the few books to give a full critique of unemployment insurance, for example, showing it as a destructive intervention that should be but is not questioned by the mainstream literature.

Sennholz refutes dozens of theoretical fallacies and exposes the bad policies that flow from them. His focus on current trends like "mandated benefits" explains how they have so drastically increased labor costs. (emphasis - mine. Wonder why jobs are going to China?) He also deals with the feminist arguments against the free market and makes a strong case for the benefits of the underground economy. (Yeah!) A principled and readable work that unifies theoretical rigor and a passion for liberty. "

I think the phrase, "capitalism has failed" should be banned from all public discourse because it triggers me to the point of fearing a stroke or a heart attack.

Oh, and that reminds me about how I recently got off on a little debate with Bill Ayers of Weatherman fame on Facebook after he posted the following ridiculous graphic, 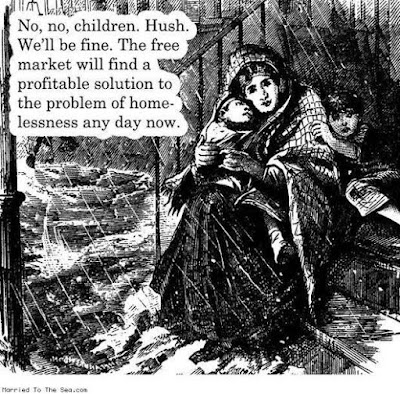 to which I commented,

That they find themselves needy is in no way an indicator of the success or failure of free markets. It's arguably a testament to free markets operating as they should. 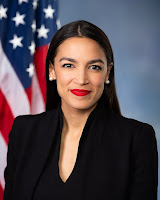 Getting something for nothing has never been promised by those who advocate free markets. In the real world, it's a lot more complicated than that though. Governments create unemployment, and via a million and one other mindless interventions create substantial fissures into which many, who don't deserve it, sink. And of course, it's always the politicians (and the lazy, and the fake SJW's) who promote the con that getting something for nothing is a sustainable economic model.

To my surprise "Professor" Ayers felt the need to respond and it went on from there.

I've gone on for too long already but just one more minor point.

Another book I read was called, "The Tragedy of American Compassion" by Marv Olsky. (?) It described how charity worked in the U.S. before the welfare state took over the job. I recall that churches took care of a lot of indigent men and that the reason for their indigence was, you guessed it, ALCOHOL. The churches would house and feed these guys in exchange for chores like chopping wood and so on. One implication is that the able-bodied non-alcoholics all had jobs.

Oh.... just one more thing, as an atheist I am never too enthusiastic when God is invoked as a possible solution to various social ills. I would not personally consider belief in God to be an important, much less the MOST important solution to poverty. On the other hand, I say, if it works - use it.

From Amazon, [broken into paragraphs by me,]

"Can a man be content with a piece of bread and some change tossed his way from a passerby?

Today's modern welfare state expects he can. Those who control the money in our society think that giving a dollar at the train station and then appropriating a billion dollars for federal housing can cure the ails of the homeless and the poor. But the crisis of the modern welfare state is more than a crisis of government. Private charities that dispense aid indiscriminately while ignoring the moral and spiritual needs of the poor are also to blame. Like animals in the zoo at feeding time, the needy are given a plate of food but rarely receive the love and time that only a person can give.

Poverty fighters 100 years ago were more compassionate--in the literal meaning of "suffering with"--than many of us are now. They opened their own homes to deserted women and children. [ME: As Tucker Carlson might say, "Huh!" Imagine if any of the SJW mouthpieces we hear ad-nauseam today, virtue-signal-puking their "concern" for immigration/refugee/ asylum-seekers actually opened their own homes to, say refugees and asylum seekers? Trudeau?] They offered employment to nomadic men (Huh! - "nomadic men") who had abandoned hope and human contact. Most significantly, they made moral demands on recipients of aid. They saw family, work, freedom, and faith as central to our being, not as life-style options. No one was allowed to eat and run.

Some kind of honest labor was required of those who needed food or a place to sleep in return. Woodyards next to homeless shelters were as common in the 1890's as liquor stores are in the 1990's. (italics - mine) When an able bodied woman sought relief, she was given a seat in the "sewing room" and asked to work on garments given to the helpless poor.

To begin where poverty fighters a century ago began, Marvin Olasky emphasizes seven ideas that recent welfare practice has put aside: affiliation, bonding, categorization, discernment, employment, freedom, and most importantly, belief in God. In the end, not much will be accomplished without a spiritual revival that transforms the everyday advice we give and receive, and the way we lead our lives. It's time we realized that there is only so much that public policy can do. That only a richness of spirit can battle a poverty of soul. The century-old question--does any given scheme of help...make great demands on men to give themselves to their brethren?--is still the right one to ask. Most of our 20th-century schemes have failed. It's time to learn from the warm hearts and hard heads of the 19th-century."

The century-old question--does any given scheme of help...make great demands on men to give themselves to their brethren?

The Tragedy of Human Compassion

In other words, if you want to know why we are embroiled in a gigantic economic fuck-fest, look no further than the governments you appeal to for "solutions" to problems. (And then ask yourself, again, do you really think these buffoons, who can never even balance a budget, can control the climate?)

"The state can be and has often been in the course of history the main source of mischief and disaster." -- Ludwig von Mises.

Most of the mysteries that lie at the root of so much chaos and acrimony we see today could be easily explained if every student in every first grade were given an introduction to the most basic elements of economics such as supply and demand along with the role of prices in balancing those forces. They should also be given a very short lesson in politics, which would consist of one question. Who pays?

In the end, I am hopeful that any reader will be persuaded over to my belief that it is not "capitalism" which has failed. It has been government.

As my mother used to say to me, "Mark my words."

It's been about thirty(?) years now since one single album dominated my mental space-time. I was about 17 when I discovered "Abbey Road." (side 2.)

This kind of reminds me of that.