My Warning from an Uberpeople.net "Moderator."

I just got a message from one of the moderators of the uberpeople.net Toronto driver's forum. In it he states,

"This forum values opinions from all angles. However, being argumentative, name-calling, personal attacks, instigating other members, and any post that can be deemed confrontational will not be tolerated. Please refrain from any posts of this manner, even if instigated. We hope you can tone it back a bit going forward.

I think he was feeling a bit humiliated after he read my criticism of his limp response to my "Uberpeople Service Animal Discussion" that I posted in the Toronto Uber taxi driver forum.

Things have really changed in the last twenty-five years. It used to be quite the rollicking back and forth in discussion forums. Now, whenever you get the better of some smart-ass who takes shots at you, he threatens to have your views censored.

As an example of my objectionable conduct, the "moderator" cited the following passage by me,

"Are you dyslexic? The individual referenced in my post was not "terrified of driving," he was terrified of dogs. A remedial reading comprehension course might help you in this thread."

I thought I was being kind in attributing the respondent's dishonest and deliberate misquoting of my post to dyslexia rather than the slimy tactic that it obviously was. It seems to have escaped the "moderator's" attention, that deliberate and dishonest misquoting of forum participants is, itself, "confrontational." Yet I doubt the individual who slandered me received any similar warning. I doubt that the thought even occurred to the censorship muscle-flexing "moderator," Mugats, or whatever his real name is.

I could be wrong. Maybe "Mugats" did send a similar warning to "Fuzzyelvis," but I sincerely doubt it.

By the way, and perhaps of some significance, is the apparent fact that this "moderator" uses a fake name and a fake picture of himself. 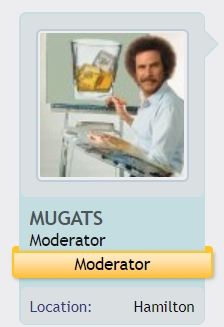 In my reply to his "warning" I challenged him to reveal his true identity. Any bets as to whether he will have the guts to step up?

I anticipate that Mr. Mugats will use his power to shut me down on the discussion board.

My last reply to him was, 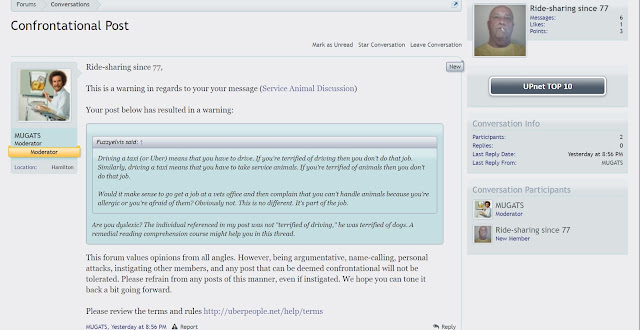 Did this person receive a "warning" from Mugats for this?

I am not omniscient, but I remain certain that none of the other "offenders" received a similar warning from the mysterious moderator. Notwithstanding, I will happily recant if Mr. Mugats provides any evidence that proves me wrong.

At this point, I would say the odds that Mr. Mugats uses his power to borf me from the forum is about 99.9 % to the .1 % chance that he will identify himself and provide evidence that he sent the other confrontational users similar warnings.

By the way, I love it when people are confrontational with me. It gives me the opportunity to work on my debating skills. If no one ever confronted me, I would be bored as shit.

Unfortunately, these days, it seems that whenever you challenge the crooked scumbags that spew their fraudulent effluvia on social media, rather than engage, they run and hide.