Abuse of Power by Mini-Tyrants

This morning I discovered that I had been blocked from accessing the Facebook Group, World Wide Anti-Uber Society, for having allegedly "dumb" and "hateful" opinions. Perhaps surprisingly, the mini-tyrant did not go so far as to accuse me of being a NAZI as well.

At first World Wide Anti-Uber Society Facebook admin, Justin La Plante, tried to bully me into complying with his world view by deleting a couple of my posts and threatening to use his administrative power to block me from the group.

During a private message session he tried to justify his bullying by accusing me of lighting fires he then had to put out. Seeing as how the "offending" post had garnered little attention or commentary, I'm not sure of what kinds of fires he imagined he had to put out, unless he was deluged with a bunch of private messages, which I doubt. In other words, his real message was that no controversial views would be permitted in HIS group if they happened to clash with HIS opinions.

He then dug himself in deeper by confessing that he had a problem with my support for Donald Trump, and that he equates my posting of a Confederate Battle flag on my own facebook page with "hatred" rather than my life-long interest in, and love of American history, and the spirit of rebellion that flag represents. In bringing up these matters, he did nothing but reinforce the fact that he was using his admin POWER to enforce compliance with his god complex.

So it came down to another small example of what we've been hearing about all year with respect to Facebook, Twitter, YouTube, and Google, the censorship of opposing views.

During the discussion, which he later published on the group page to demonstrate how flawed my character is, he tried to show how big his brain is by asking me some civics questions. 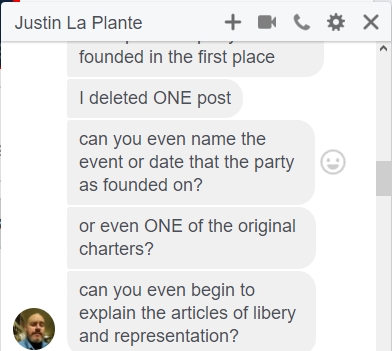 He obviously wanted to keep kicking this ball back and forth in the PM session. I don't like wasting my time arguing with fools in private. I'd much rather poke fun at them, and expose their self-righteous hypocrisy in public so I invited him to take the debate back onto the group he wanted to block me from.

He took the bait. 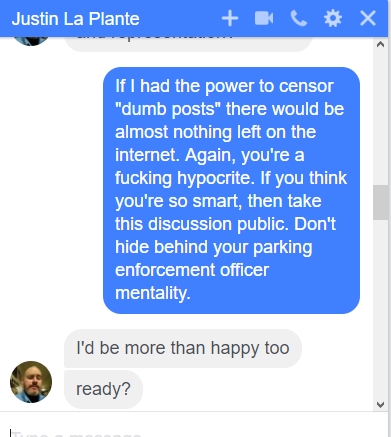 I was confident I had sized this guy up rather well during our PM session, that he was an intellectual lightweight, and that it would be easy to publicly humiliate him in the light of day.

After he agreed to an open debate, I proceeded to annihilate Justin La Plante in the World Wide Anti-Uber Society group.

It was no surprise to me, therefore, that after a few punches were thrown, he took the coward's way out, posted a few twisted misrepresentaions to get the last word in, then deleted the debate, and blocked me from the group.

Maybe the guy is not such a coward in the end. After all, it takes some balls to brazenly demonstrate that you have none.