It's been quite a while since I joined a Facebook group where participants who believed they, or their loved ones, had been injured by the mRNA vaccines would relay their experiences. I would browse through the feed to see what they were reporting. It didn't take long, perhaps a week, before Facebook erased that group.

Because of that, and other sleazy tactics employed by behind-the-scenes Facebook censors, I stopped using Facebook last May. Its prior usefulness as an information and networking tool had been completely gutted. I still use the messenger app to keep in touch with some people. My last post was on May 19, 2022. 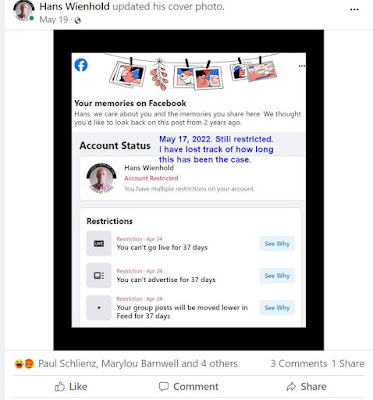 I still use Twitter as an information source, and to blow off steam. Where Facebook uses a sledge hammer to suppress speech, Twitter has a lighter touch. But there are some things Twitter just doesn't want its users to see. Keep in mind the fact that governments in the West fully intend to codify this censorship into law.

This afternoon, I tried to post the story about Maddie de Garay on Twitter. It didn't work. 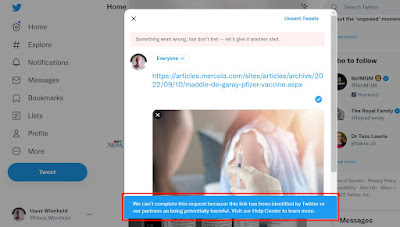 Here is the "potentially harmful" link.

Update Sept. 11, 2022: I just received a message telling me the above link is now behind a paywall. If you encounter the same problem, check here.